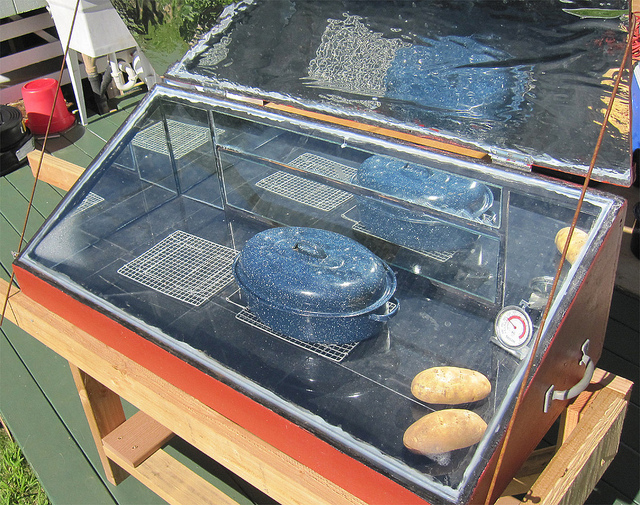 The sun radiates heat that can be used in a number of ways including concentrated solar thermal systems that generate steam to power a turbine and in solar hot water systems that can provide hot water to homes and swimming pools.  Heat radiation can also be used to cook food.  To do this, a device that gathers the sun's heat and focuses it into a small area is needed.  This device is known as a "solar cooker", or "solar oven".  The simplest way to do this is to make a box using any material, add a clear top and enclose the inside with aluminum foil so when the box is directed towards the sun it will become hot.  A pot or pan (the darker the better) containing the foor you're cooking can then be placed inside the box to begin cooking.  Mirrored surfaces can increase the temperature of your solar oven and can reduce the tiime it takes to cook your food.

To the right is a pic of a nice home-built solar oven that he sometimes uses to cook meals, like the Thanksgiving meal he is preparing in this image.  Mouse over or tap the image to see this solar oven from a different angle as Erik uses it to cook a chicken with veggies dinner.

You don't have to build your solar oven to be able to have one. There are several quality brands and models of solar ovens on the consumer retail markets.  If building your own solar oven is a step towards solar cooking that you would like to skip, we recommend that you consider purchasing a quaility solar oven because we believe you'll be so happy with solar cooking that you'll be glad you have a product that will deliver many meals to come and stand up to the wear and tear - and can stand the heat of the kitchen! 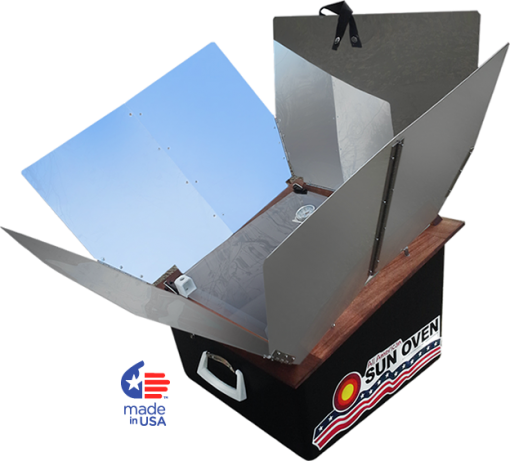 Solar cooking is comparable to cooking in a crock pot and many of the same dishes that can be cooked in a crock pot on your kitchen counter can be cooked in a solar oven.  As Erik shows us, he prepared a chicken and vegetable dinner.  We have found that cooking with a solar cooker greatly improves the taste of the food. We experimented with potatoes, cooking them four different ways: in our oven, in our pressure cooker, in water and in our solar cooker. The potatoes were all from the same batch and we all agreed that the potatoes had a much earthier taste when prepared in the solar oven than did the other cooking methods.  We have also found that other food also seem to taste better when cooked in the solar cooker.

If you're someone who feels secure in knowing that you are prepared in the event of some disaster, such as a tornado, hurricane earthquake, or other event that results in extended power outages, solar ovens can be used to cook and heat food.  Many of us will never face such an event, but we're all pretty sure we won't be, just as those who experienced the aftermath of Hurricane Katrina thought they'd never face such an event.  But there are other great reasons to own a solar oven and two of those reasons are camping and the other is because they're just plain fun!  Take your solar oven camping and while you're off exploring and swimming and canoeing, your solar oven is back at camp quietly and efficiently slow-cooking lunch or supper.  But the greatest reason to love solar cooking is because it's fun knowing that you can put some ingredients in a pot or pan and leave it in the sun and come back later and realize that your next meal required no connection to the power grid and required the making of no fires.  It's just a neat thing to do!

If you've tried a cooking comaparison with, or cooked with, the sun using a solar oven, please tell us about your experience in the comments below.