In our previous installment Powered By The Sun #1: The Rosetta Mission - Part 1, we provided a brief synopsis of the European Space Agency's Rosetta Mission that has rendezvoused with a comet and will attempt to drop a lander onto that comet's surface.  In this segment, we'll take a look at what Rosetta is doing today and will be doing in days ahead as it nears the most exciting part of the mission, the descent of lander Philae which, for the first time in human and space exploration history on November 12, 2014, will land on the surface of comet 67P/Churyumov--Gerasimenko. But first, what is it about Rosetta that has it being featured on a solar energy blog?

Well, first of all, solar energy is energy that is derived from heat and light from the sun. The sun is a star that is orbited by 8 planets and countless smaller icy, rocky, and metallic objects that are collectively known as the solar system. And the fact that, for the first time in history, humans will attempt to land a space craft on the surface of a comet is just, quite simply, pretty cool. But, second and more to the point, Rosetta and its human controllers could not accomplish this astronomical feat without the sun. It is the sun that provides the energy in the form of photons of light that are absorbed by the spacecraft's solar cells that power Rosetta's instruments. 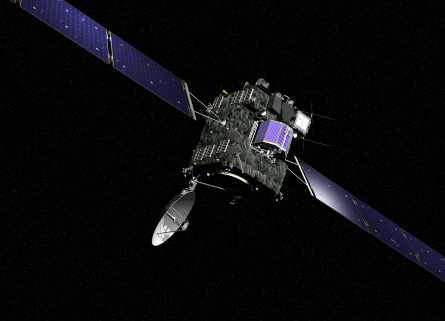 Rosetta is a box-shaped structure that is approximately 9 feet by 7 feet by 7 feet that is flanked by a pair of 47-foot solar panels that bring the entire width of the spacecraft to 104 feet. The reason Rosetta needs to have 64 square meters of surface area is because the probe is so far from the sun that very little energy reaches the solar panels.  The larger the photon collection area, the better this far out in space!  The solar panels on board Rosetta keep the probe's batteries charged and for several years Rosetta's electrical systems were put into hibernation in order to keep the batteries charged to capacity.  Then, in January, 2014, Rosetta was awakened from it's long slumber to prepare for its long-awaited rendezvous with comet C-G. Thanks to the solar energy collected by Rosetta's solar panels, the batteries onboard the spacecraft were completely charged and ready for the main mission later in the year.  And now, in a short two weeks, Rosetta and the European Space Agency will attempt to land Philae on the comet's surface.

You'll notice in the image to the right of this article (click on it for high-resolution) the solar cell covered body of the Philae, that bluish bit on the side of the center mass of Rosetta between the solar arrays.  Philae's solar cells will continue to collect solar energy after it has touched down on the comet and is an important part of the mission.

We hope you will join us for this momentous occasion in human space exploration as we follow and report on Rosetta and Philae through mission's end as comet and guests sail around the sun to head back out into deep space.